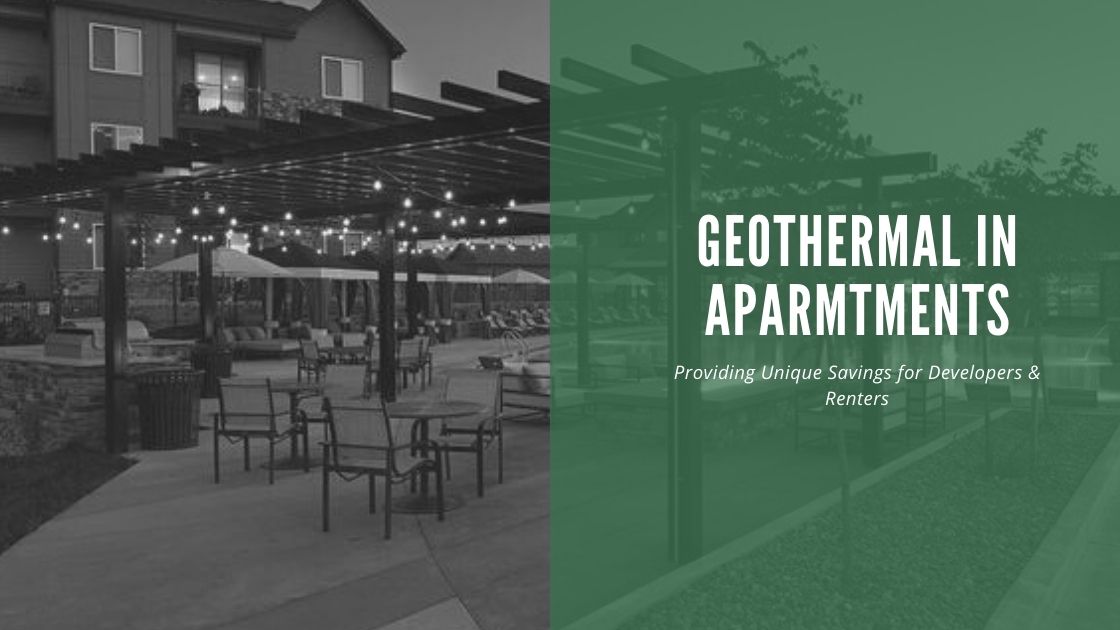 On a project in Colorado, 12 apartment buildings comprised of 288 one-, two-, three-bedroom apartments are being heated and cooled by a geothermal system installed by Colorado Geothermal Drilling.

Over a period of approximately 12 weeks, our crew of 3-4 on-site geothermal installers drilled in 120 310-foot loops and four 380-foot loops for a combined total of just over 15 miles of geothermal pipe in the ground. The skid mounted drill and crew averaged about 610 vertical-feet drilling a day while grouting and backfilling boreholes. Work efficiency was essential to this project so the skilled crew worked tirelessly to develop processes that allowed them to complete more work in a safe and timely manner. Once drilling was completed on a building, headering occurred the following week and drilling continued on the next building. This kept the project delivery on schedule and continued as framing of the buildings began.

Interior work for the project was no different. Each apartment was supplied with their own heat pump. Each building was supplied with its own circulation system of 2 ECM variable speed circulation pumps. Twelve buildings and a club house completed the project. All of the drilling took place after the building foundations were backfilled. Rough installation of interior pipe was done during rough duct work installation. After painting was complete, heat pumps were set and final piping connections were made to each heat pump, mechanical room piping was installed, and the geothermal system was purged for the apartment building.

With utility company and federal rebate incentives, and a proper, economically designed system and installation; these large geothermal heat pump projects are very feasible. Lower overall energy use for heating and cooling systems are very attractive to developers, building owners, and residents. The combination of all these savings off-set the higher up front costs and make the geothermal system competitive and more cost effective than a conventional HVAC system over the long term.